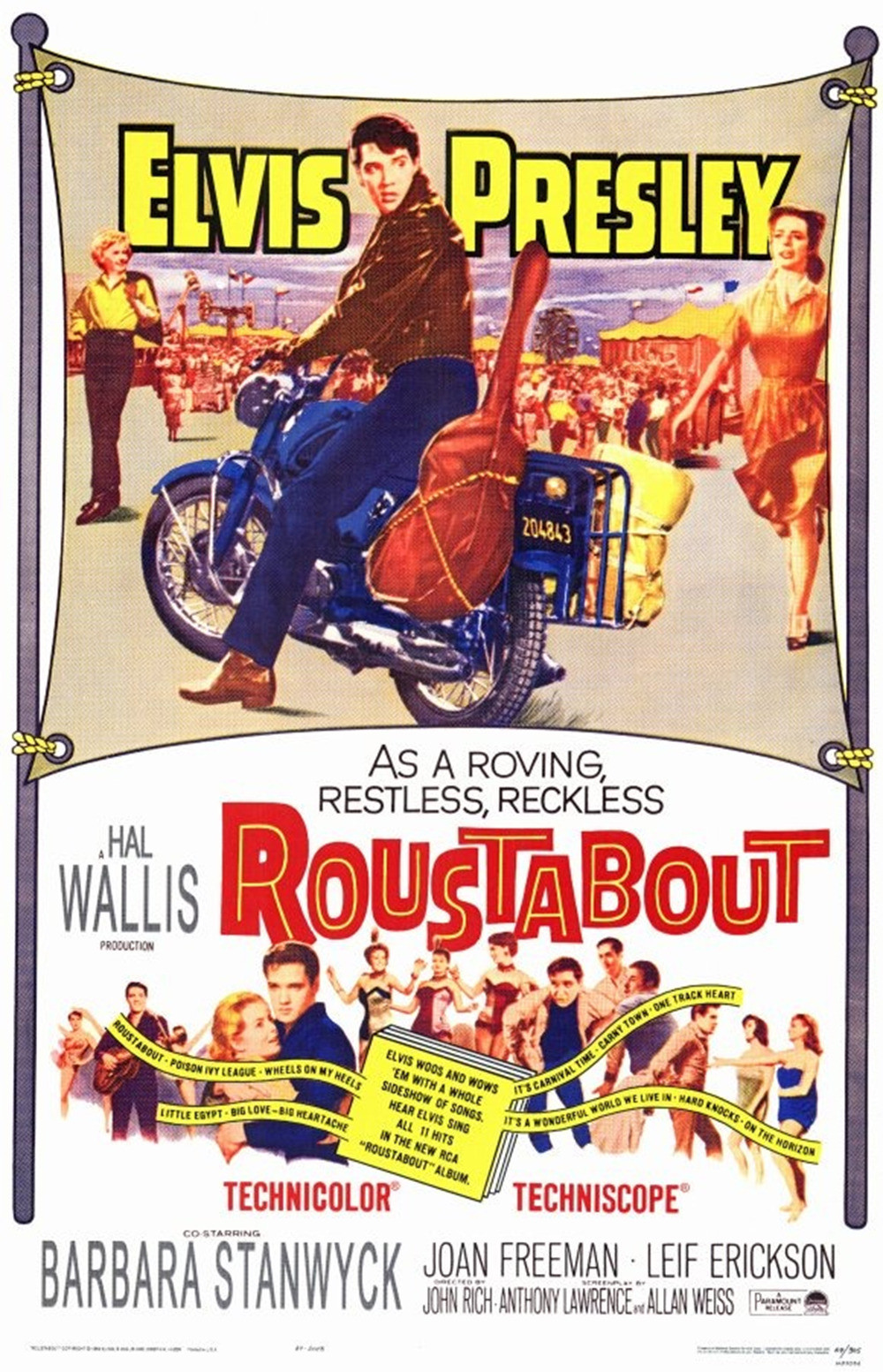 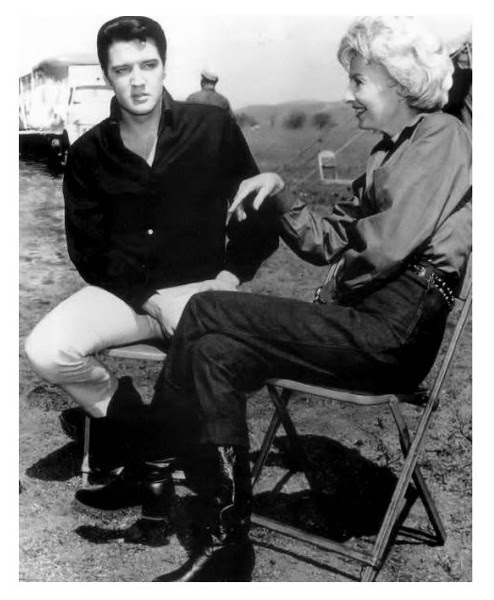 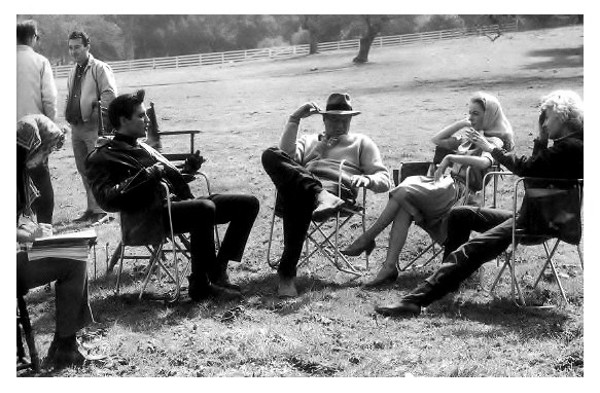 Sooo many fights in this one.  Charlie is decked out in leather on a motorbike…I know nothing about motorbikes, but this one doesn’t look real tough to me, anyway Charlie gets into his first fight at the teahouse.  There are a few regulars in this one, Kenneth Barker, G.I Blues, Loving You, Raquel Welch(in the tea house scene),  Terri Garr, Lance LeGault (usually is E’s double and stunt man) .  The pink shirt that the waitress is wearing looks familiar…looks like the one one of the girls from Blue Hawaii was wearing towards the end of the movie at breakfast…just sayin… 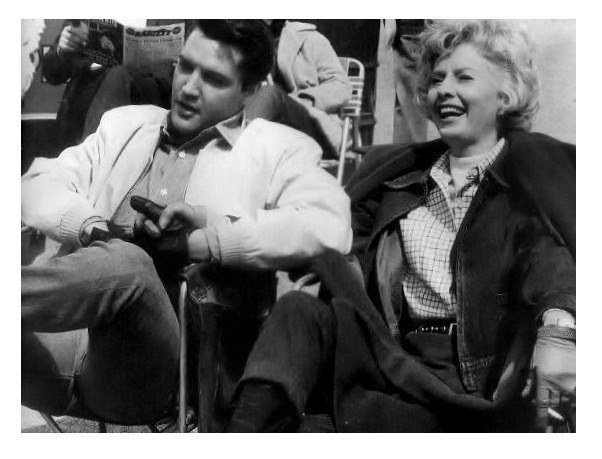 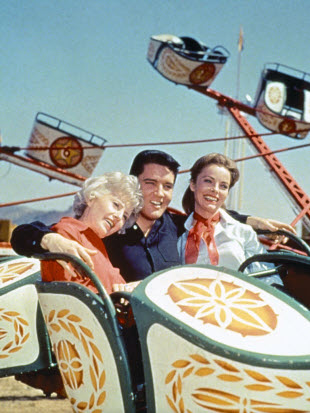 So the college boys fight Elvis and then he gets fired, cause he is a cranky trouble maker.  And off he goes to find employment elsewhere.  Driving down that ever familiar piece of road that was in every 60’s and 70’s show.  So we had the song, the fight and now there’s an accident,  Charlie crashes spectacularly through a fence, oh weee thank goodness, he’s alright, but his guitar is all broken.  Anyway it turns out they are carnival folk, and he has found his employment, ah the old day it was so easy to get a job.  Barbara Stanwyke owns the carnival and Joan Freeman plays Cathy, the romantic interest, one of the romantic interests anyway.  And so Charlie is the newest roustabout, he starts off by working on the little ferris wheel (which, I read a while ago, actually still exists and resides in South Australia).  Second love interest is Madam Mijanou, Sue Ane Langdon (you can see her again in Frankie and Johnny).  Ahh look, Charlie is wearing the Elvis uniform, denim and black boots. 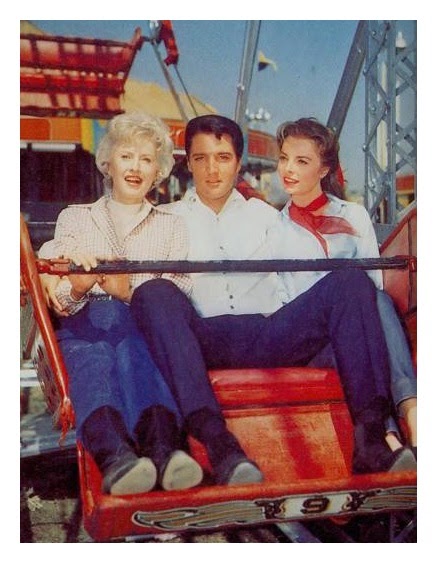 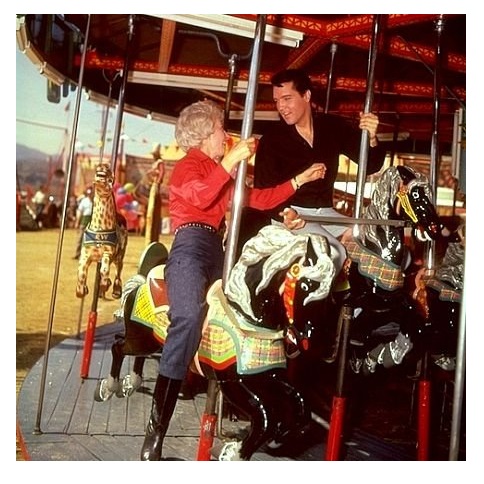 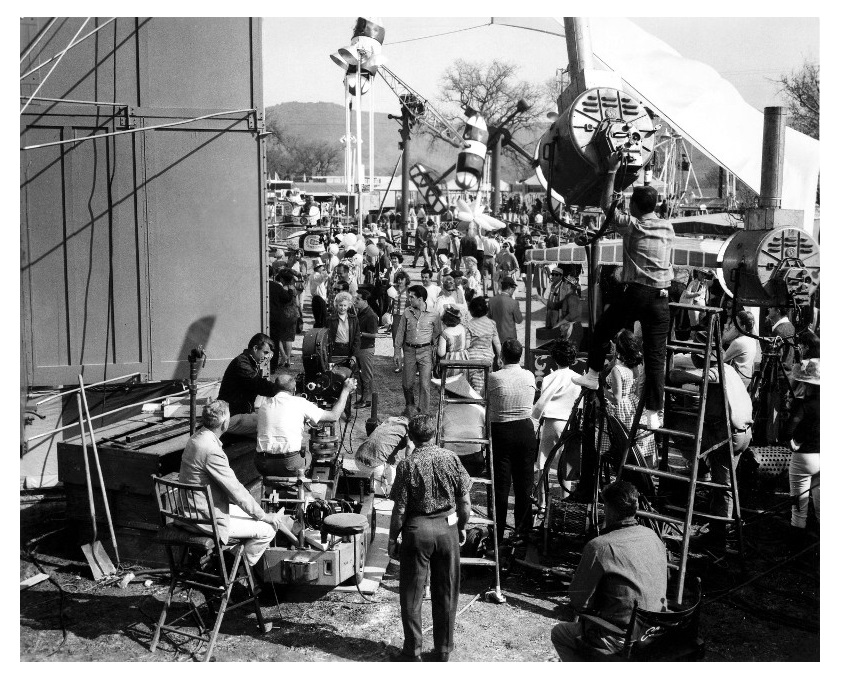 One gal sees the other gal kissing Charlie.  Gal cranky, but don’t worry too much.  Charlie is bringing in a lot of customers for the carny, but it may not be enough to save the carny from financial ruin.  The carnivals local rival is lurking about and offers Charlie a job, he declines for the time being.  Charlie takes up Maggie’s offer of a contract with her carnival…for the time being.

I love Barbara Stanwyke, she is simply awesome.  Her raspy voice really contributes to her character.  I think that the guy that caused the fight with Joe was the same guy that caused a fight in Blue Hawaii.  Anyway Joe got arrested and spent the night in jail because of the fight.  Charlies bike is all finished being fixed so he no longer has any ties to the carny, oh apart from the contract he signed.    He takes the bike for a spin…on dirt…and makes screechy sounds with his tyres…on dirt.  Then Charlie enters the Dome of Doom or the Tunnel of Terror ah there it is The Wall Of Death. He stacks it right at the end, and this causes a huge problem with Cathy.  Maggie verbally breaks the contract then Joe comes along, just as Charlie is about to leave for the other Carnival, and proceeds to punch Charlie a few times, right in the kisser, or in this case the money maker.  And off runs Charlie straight to Carvers Carnival (Harry Carver {Pat Buttram} was also in Wild In The Country) and he sings the very very famous Little Egypt.  Little Egypt is wonderful during this song, when she sings (not really her) goochy goochy goochy, this didn’t make it to the album, good reason for that I suppose, it is a bit weird, but I love it. 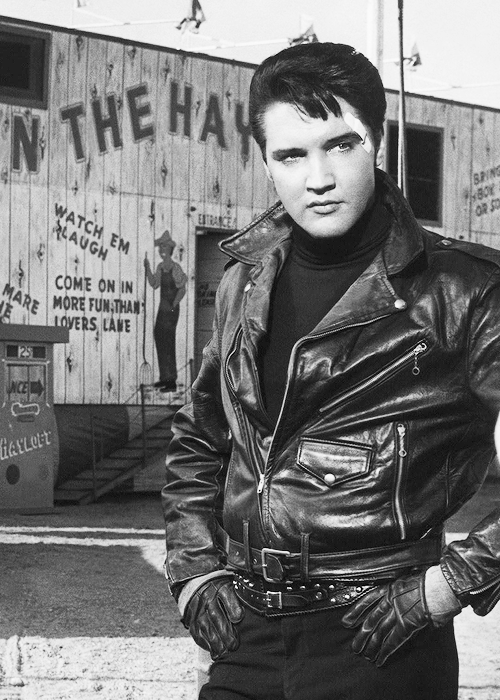 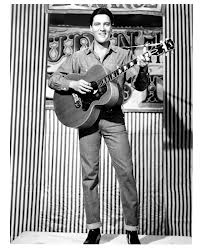 During another number (Big Love Big Heartache) Cathy shows up because Maggie’s carnival is facing bankruptcy and she realises he isn’t such an arse…and she apologizes.  Cathy mentions the dilemma that the carnival is facing.  Charlie is off to the rescue, a knight in shining armour.  A few bad stage shots later and Charlie arrives back at Maggie’s, after a few songs all of Maggie’s problems are solved, and that, my friends, is the power of Elvis Presley.  🙂  Kisses the girl.  THE END!

A different and unrelease version of the title song^

Well today is the day.  The 16th.  Yep the 16th of August all Elvis fans know too well.  16th of August 1977 was the last day of E’s life.  I don’t want to rehash the details, cause I’m not really interested in the details of how or where, all I know is it was the end.  I was all of 6 years old when Elvis died, and I don’t even know why, but it still upsets me…maybe I’m a bit lame, ah well, call me lame cause I JUST LOVE ELVIS…still, after all these years.

You could write me a little something :) Just down there ▼ Cancel reply